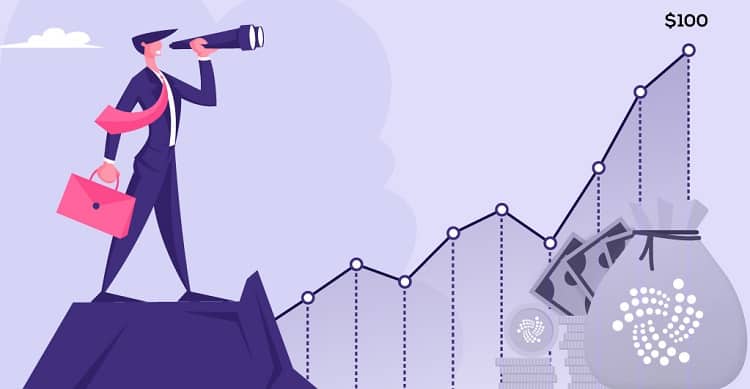 IOTA, Internet of Things Application, is the new-age digital coin based on the IoT (Internet of Things) technology. It is a distributed ledger that works with the help of the decentralized Directed Acyclic Graph (DAG) known as the Tangle System. The Tangle uses the Proof-of-Work algorithm for verifying transactions which in turn relies on the Curl hashing function. MIOTA is the native cryptocurrency asset of IOTA. This open-source, free data and value transfer protocol which aims to develop IoT solutions, was introduced in 2015 by David Sønstebø, Sergey Ivancheglo, Dominik Schiener, and Dr. Serguei Popov.

Since IOTA exhibits some similarities with big names such as Bitcoin, few speculate that it might reach $100 worth in the long-term future.

IOTA is capable of operating on IoT devices. Its price has remained quite volatile so far after its inception and launch. In November and December of 2015, IOTA sold all its tokens through a crowd-sale. After the initial crowd-sale, the IOTA community donated 5% of all the IOTA tokens towards developing the non-profit IOTA Foundation, whose most important role is to promote the development of IOTA and to popularize it in the market. In August 2017, its price movement showed an uptrend briefly and then reached an all-time high price of $5.23 in December 2017. After a quick resurgence in April 2018, its price drastically fell to $0.45. It has continued being in a volatile state so far.

The price of one MIOTA at the time of writing this article is $2.06. Its current market cap is $5 billion, and its 24-hour trading volume is $180 million. IOTA had released a total number of 2,779,530,283,277,761 coins at the time of launching MIOTA, which is circulating as well as maximum supply in the crypto market.

Experts have differing opinions about this novel digital currency; however, many find this technology capable of beating even Bitcoins perhaps in the future. The IOTA project holds a promising futuristic scope, but in order to reach the $100 mark, MIOTA has to have a market capitalization of approximately $278 billion.

IOTA Price Forecast for Next 5 Years!

The next five years are quite critical for IOTA in terms of determining its future. MIOTA is currently placed at the 28th rank in CoinMarketCaps’ crypto token ranking list. The IOTA price prediction is as follows:

IOTA is almost infinitely scalable because it leverages the benefit of the devices connected with the IoT and hence makes the IOTA coin function outside the blockchain technology. IOTA has collaborated with some of the leading tech companies and other well-known business groups who find the IoT-based solutions offered by the IOTA project quite useful in almost all walks of life.

IOTA may also reach up to the $100 price mark one day. Ultimately, IOTA aims to create a machine-to-machine economy, and investing in it can potentially prove beneficial for crypto traders.