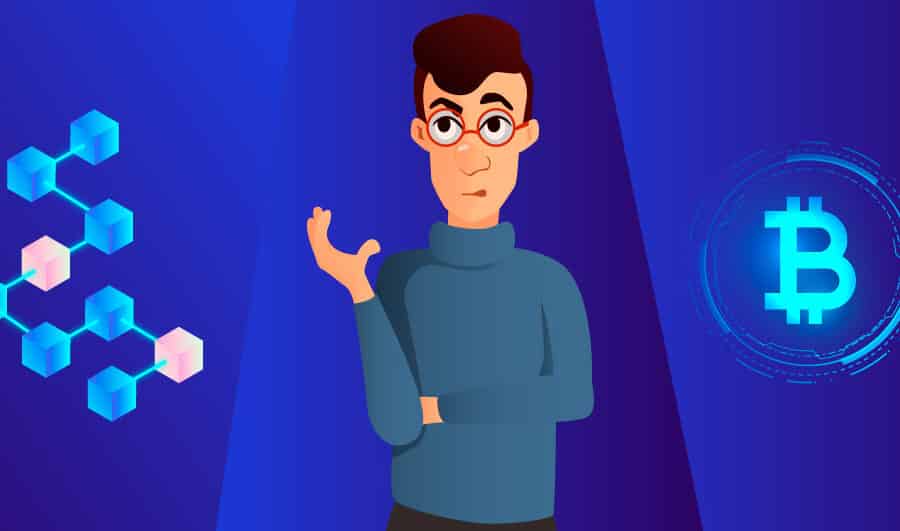 What is the Difference Between Blockchain and Bitcoin?

An Introduction to Blockchain and Bitcoin

Simply put, Bitcoin is a digital currency that does not have a physical form, unlike the fiduciary currency. Nevertheless, it is widely used for transacting online, similar to fiat currencies like EUR, AUD, USD, etc.

The data related to each Bitcoin transaction is stored in a block that is linked or chained to the blocks that hold information about previous transactions. Blockchain, as the name suggests, is the collection of blocks (data) linked together chronologically. In other words, it is a distributed ledger that stores information or data.

How Are Bitcoin and Blockchain Different?

The objective of creating Bitcoin was to provide a type of currency that was not owned or governed by a single authority, unlike the traditional currency. The motive is to use Bitcoin for facilitating P2P transactions by eliminating the need for third-party intermediaries. All Bitcoin transactions are stored in a distributed ledger (Blockchain network.)

Over the years, many cryptocurrencies were introduced that have blockchains that have varied functionalities or applications. For instance, Ethereum’s blockchain is ideal for smart contracts. Or, in the case of the Ripple network (XRP), the blockchain is based on a completely different algorithm (Consensus Algorithm), unlike Bitcoin, which revolves around Bitcoin mining (Proof-of-work Algorithm).

Some of the uses of blockchain technology include and not limited to:

Ethereum facilitates smart contracts that are codes incorporated into the blockchain. Smart contracts are predetermined terms of the agreement. When these terms are fulfilled, contract agreements are automatically processed.

What Is the Difference Between Blockchain and Bitcoin?

How Does the Bitcoin Blockchain Work?

Apart from using blockchain for publicly recording different transactions, it is also used for storing other data as well. As a matter of fact, some businesses and organizations are actively using blockchain technology. The list includes IBM, Walmart, Siemens, Unilever, AIG, to name a few. So, how does blockchain work?

In a nutshell, blockchain is a chain of blocks arranged chronologically where each block stores data. The data could be anything like transactions in the case of bitcoins; in fact, blockchains can also store information like emails, bond trades, contracts, and options are limitless.

As established earlier, blockchain is a type of database storing different kinds of information. Whenever a new block gets added, the database is copied while the copies are sent to every computer or node in the blockchain’s network. Every node in the blockchain network verifies and updates new inclusions after cross-referencing with other nodes to ensure the information provided in all the copies is the same.

The validation of every transaction or information on the blockchain network makes it decentralized as the network is not controlled by a single node or computer but by all the users in the network.

So, what happens when a node notices that one of the ledger copies was manipulated, meaning one of the copies is not carrying the same data?

If any of the ledger copy is manipulated, the transaction is not validated and thus gets rejected. Thus, this security element of the blockchain system prevents users from tampering with the public ledger. For instance, the blockchain network does not allow users to spend the same cryptocurrency more than once. It is for this reason; Bitcoin transactions are considered to be secure with no scope for manipulations.

Blockchain is a public ledger or database that stores information in blocks. New data is entered into a fresh block, which is then chained together with the existing blocks. While there are many blockchain technology-based applications, it is primarily used for recording transactions. Bitcoin is the most popular cryptocurrency, but it is highly volatile too. Although, as this year started, the price of Bitcoin reaches its all-time high & still continues its upward trek in 2021. However, Bitcoin’s roller-coaster ride continues, but if you plan to invest or trade in Bitcoin shortly. In that case, the Bitcoin Aussie System is the most prominent & and innovative way to invest in Bitcoin, which uses an algorithm that auto trades for its users. To know more about it, you can check review on Bitcoin Aussie System platform. On the other hand, Bitcoin is backed by a decentralized blockchain. Every new Bitcoin transaction is entered into a new block; thus, the transactions are recorded permanently. As a public ledger, Bitcoin’s blockchain network is visible to all users. Blockchain provides the element of transparency where Bitcoin transactions are concerned.