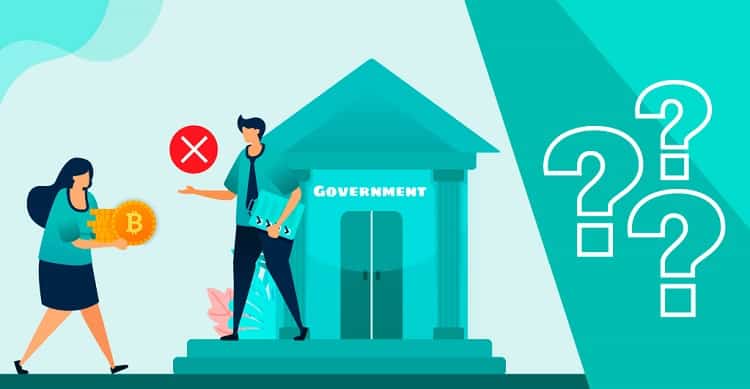 What is Making the Government Not Accept Bitcoin as a Currency?

Nothing unless stable can be valuable enough for receiving a currency status from the government. Of course, Bitcoin falls short of being one. Simply using the term “currency” doesn’t make it one. Further, it is not stable when its value is to be considered. People often like trading with a currency system that will not change in value much in the further future. However, it is not the case with Bitcoins.

When the inventor decided there will be just 21 million coins ever in the world market, it is then that the unpredictability of the Bitcoin values might have taken over the world. Imagine knowing what you are putting up for exchange today might value far higher or lower tomorrow. Would you use it for trade at all? It’s like, today, you trade Bitcoins for $775, and tomorrow, its value rises to $17000. This is the situation of Bitcoins in the current world.

Reasons Why Bitcoin Is Not Treated as a Currency:

Here are two reasons why Bitcoin is not being considered as a currency system in the world:

Bitcoin inflation and deflation is a pretty uncomfortable fact, but it’s considered more normal than anything else in today’s world. Its volatility can rise to 200%-300% and can even jump down to 80%-90%.

Why is the Government not Accepting Bitcoin?

Even though it’s unstable and unpredictable, you could still find these two reasons insufficient for negating Bitcoins their currency status.

However, there are other reasons. For example, the government is not sure if they can trust the Bitcoin system since the government operates via the fiat system, issues or destroys money in no time, to exert economic influence on the world’s market.

This way, the government stimulates investments, generates jobs, avoids recession and inflation, diverts funds differently as per requirement. Thus, something out of the government’s control can definitely be a matter of great concern.

Government regulations can impact Bitcoin prices for sure. There are three types of rules put forth by the government that affects the status of Bitcoins.

Globally, countries’ approaches to regulation are also responsible for creating chaos and confusion around Bitcoins; China banned its use, whereas Japan welcomed it.

As per an essay from Project Syndicate, eminent economist Kenneth Rogoff stated that Bitcoin could never supplement the government monetary system since it would make tax collection and fighting criminal activity extremely difficult.We can only say that the government would never want a system in place that is not entirely under its control in some way, and not accepting Bitcoin as a currency is a key prediction for the near future. Still you can invest in Bitcoin from a platform like Bitcoin Code which is made to maximize profit from Bitcoin. Read Bitcoin Code Reviews to know more about it in details.